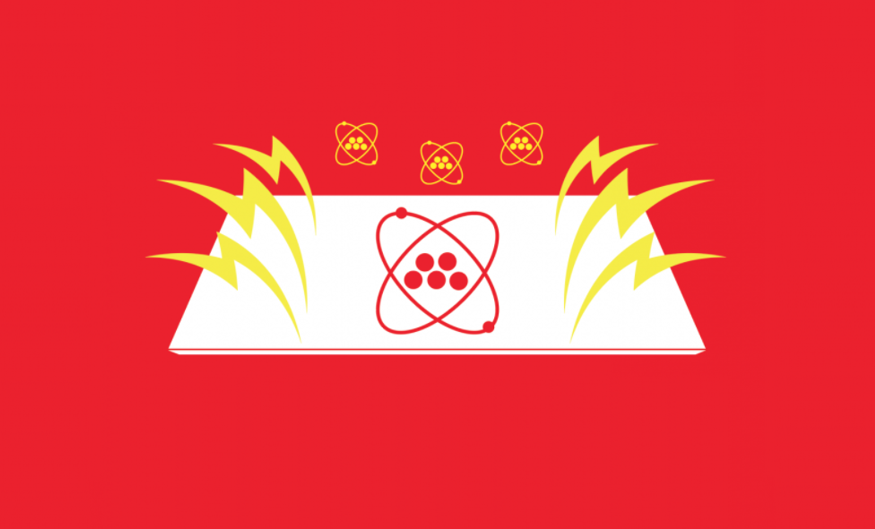 United Industries recently passed on some information to us here at Grimco that we felt could be very beneficial! Static is not well received on clothes, hair, substrates - all the above! Being able to combat static is crucial when handling Styrene faced signs. Continue reading to see what Wade Sisco at United Industries  has to say about it.

Signmakers Wage War On Substrate Static
An ongoing war is waged daily between large format printers and substrate static electricity generated by styrene faced sign materials. We have witnessed battle scars ranging from edge overspray to ghosting lines in prints caused by static fields misdirecting ink droplets as they leave the printhead and travel to the substrate surface. To vanquish an enemy, you have to know them. Let’s begin with understand what substrate static is. 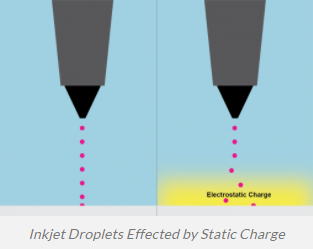 What is Substrate Static?
Electrostatic Discharge (ESD), is commonly referred to as static. ESD is what you felt when you shuffled you feet across the living room floor and then devilishly shocked your nearest parent or sibling. The “shock”, was the discharge of particles stored in your body passed on to your unsuspecting victim.
Let’s take a quick physics refresher to better understand what is happening. Electricity is made up of atoms consisting of 3 basic parts:
When an atom has the same number of protons and electrons it is stable or has a neutral electrical charge.
When atoms have differing amounts of protons in relation to electrons it is considered unstable; resulting in a static charge. 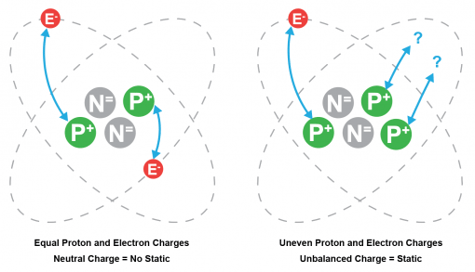 Now, stay with me.
Negatively charged electrons encircling an atom can travel freely back and forth among other atoms. When this movement is unrestricted, the atoms quickly stabilize as the electrons flow freely and evenly; occurring within mediums known as conductors. Plastics including styrene, are insulators against the flow of electrons between atoms; resulting in unstable atoms and a static charge. 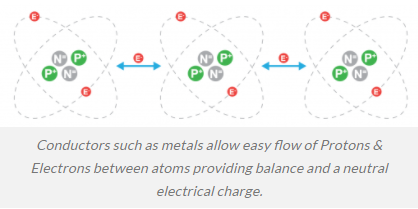 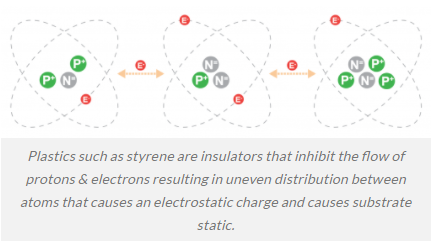 How Humidity Relates to Substrate Static!
Relative humidity also impacts the presence and dispersion of substrate static. Printshop environments possessing the ability to closely control their environments enjoy the added benefit of lowered static levels within their plastics. Relative humidity levels between 60%- 70% provides air with greater conductivity allowing for easier absorption and distribution of excess particles. In essence, higher humidity allows for easier discharge of static charge.
Whew! Okay, So How Do We Fight Substrate Static?
Now that we know our enemy a little better, we can plan our attack. Since we now understand that static is caused by atoms with uneven ratios of protons vs. electrons, we need some artillery that can resolve this. Let’s look at several popular methods currently available.
Electrostatic Discharge Ionizing Guns
ESD’s are available as a pressurized gun or wand device that distributes neutrally charged ionized air across the surface of your substrate. The ionized air attracts electrons away from the substrate’s surface atoms resulting an evenly charged and neutral atoms; thus dissipating the static charge from your sign substrate. Examples of these devices include:
Electrostatic Discharge Wands
ESD wands may consist of a rod or string that comes in contact with the sign substrate as it is fed into the machine. These wands are grounded to the printer chassis to assist in the discharge of electrostatic. Examples of these include:
Humidifiers

Controlling humidity in your printing environment can greatly reduce electrostatic charge with sign substrates. Examples of these may include:

Hopefully these tips and informational tricks will help you beat static when it comes to handling Styrene faced substrates! You can view the original article here on United Industries website.

Applying and mounting cast translucent vinyl successfully is one of the most important steps to get...
Read More

Does Digital Print Acrylic Really Make a Difference?  Acrylic is excellent for a wide range of...
Read More